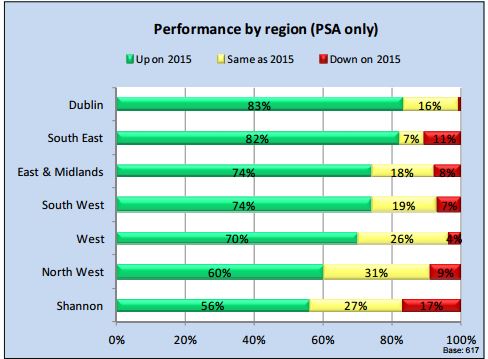 Failte Ireland says almost 75% of  providers in the Paid Services Accomodation (PSA) sector are reporting an increase in business so far this year compared to 2015, but with the exception of the Shannon Region, growth in the North West is lower than any other area of the country.

Failte Ireland says it expects growth to continue as a result of investment in the Wild Atlantic Way, particularly in the West and North West, and businesses are generally positive about the future.

The full Fáilte Ireland Tourism Barometer can be accessed HERE

“The tourism sector is certainly upbeat at the moment. An early Easter coupled with St Patrick’s Day celebrations made for a busy first quarter for most tourism businesses with increased trade from the overseas markets. According to operators on the ground, mainland Europeans have been coming over in strong numbers and the US market is performing particularly well this year so far. This bodes well for a good summer season.”

Overall, paid serviced accommodation (PSA) providers began the year with a bounce and a large proportion (73%) of respondents to the survey reported growth. Hotels were the strongest performers, with almost four in five (78%) reporting an increase in trade. Close to half (46%) of hotels cited the ‘improved domestic economy’ as a positive factor affecting their business this year.

Meanwhile, guesthouses have also started the year strongly with nearly two in three (63%) reporting business from overseas visitors up to date this year.  Interestingly, hostels are also enjoying a very good 2016 so far - with two thirds (67%) reporting an increase in visitors to date this year – thanks in part to strong overseas trade.

It is a sign of greater buoyancy in the sector that, after many years of retrenchment, accommodation providers have returned to putting money back into their business and are now seeing the rewards. This is particularly the case among hotels, where two in five (40%) cite ‘own investment in the business’ as a positive factor this year.

Apart from accommodation providers, there was growth also in the wider tourism and hospitality sector in Q1 2016. Tourist attractions enjoyed a strong start to the year with more than half (52%) reporting increased traffic through their turnstiles while many others (35%) reported business holding steady on last year.

Growth was also on the menu for restaurants in the first few months of 2016, with half (49%) receiving more tourist customers compared to the same period last year and two in five (41%) receiving the same level. Businesses in the restaurant sector appear to be particularly benefiting greatly from improved exchange rates in favour of overseas visitors from outside the Eurozone. Over two in five (43%) cite ‘exchange rates’ as a positive factor this year – the highest proportion of any industry sector.

Similarly, golf clubs have teed off well this year, with two in five (39%) welcoming more tourist customers. Expectations for the remainder of the year are very high, with most (76%) expecting to be up.

“As always, when sentiment is so upbeat, there is a need for caution to avoid any complacency. Indeed, some operators are acutely aware that things could change quickly and the possible fall-out from Brexit, should it happen, has been raised by some in the barometer.

“Therefore, it is vitally important that everyone in tourism keeps a firm grip on those things we can control, particularly competitiveness and our value for money. For our part, Fáilte Ireland will continue to develop our new destination brands – the Wild Atlantic Way, Ireland’s Ancient East and Dublin: A Breath of Fresh Air – to ensure that Ireland remains an attractive and compelling place to visit.”