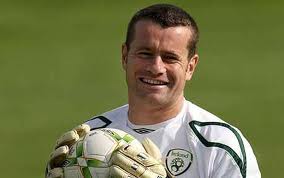 Shay Given's second appearance in nearly a year was cut short today when injury stopped him from taking to the field in the second half.

The Donegal man hoped to give his Euro 2016 hopes a boost when he played in the Premier League for Stoke.

But Shay, who turned 40 this week, was forced off with a suspected groin strain in Saturday's early kick-off.

Shay, from Lifford, conceded two goals in the first half against Man City, who won the game 4-0.

His fans will be hoping that today does not represent a setback to Shay’s chances of making Ireland’s Euro 2016 squad.