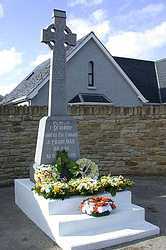 The Tír Chonaill Commemoration Committee will this evening unveil a newly commissioned statue at the Drumboe Martyrs’ commemorative site in Stranorlar marking the 100th anniversary of the 1916 rising.

A number of new murals will also be unveiled at the ceremony tonight.

The statue is a specially commissioned statue which has been produced to represent an Irish Volunteer styled in the uniform of the era of the Drumboe Martyrs.

Committee spokesoperson Jack Britton says it's a significant addition to the Drumboe site, which itself is very important to republicans..........

May 14, 2021
Finn Harps picked up their 5th point out of the last six games on Friday evening with Dundalk having now gone three games without...