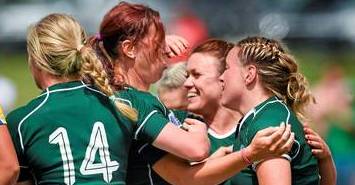 The Ireland Women's team, has been named to face England this Saturday. The Women's RBS 6 Nations game will take place in Twickenham at 7.15pm, following the men's fixture.

Head coach Tom Tierney has made two personnel changes and one positional switch to the side that lost to France in Perpignan last time out.

There is a straight swap at out-half where the experienced Nora Stapleton comes in for Nikki Caughey who will provide back-up from the bench, the other change is  in the pack, Tralee's Ciara Griffin, who won her second cap against the French, is handed her first Six Nations start at flanker.

In one positional change Paula Fitzpatrick shifts to number 8 and Heather O'Brien moves to the replacements.