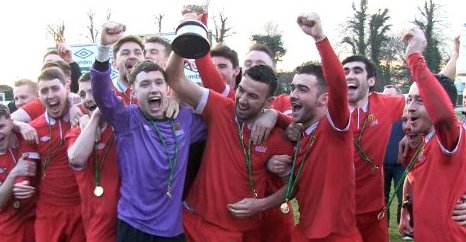 Donegal's Jonny Bonner starred for IT Carlow on Wednesday as they came out on top in the Colleges and Universities Premier Final with a 2-1 victory over Colaiste Stiofain Naofa after extra-time.

Bonner proved to be the hero with a man-of-the-match performance in a pulsating final in Haddon Park, Killester, where he netted the all-important winning goal.

Inishowen's Kieran Mc Daid was also part of the winning Carlow side.

Carlow will play the Letterkenny Institute of Technology in the Umbro Cup Semi Final next week.

For new manager Luke Hardy, it was a tremendous achievement in his first season in charge of IT Carlow and the college claim their first Premier League triumph since 2012.

Stiofain Naofa actually had the better of the opening half with the evergreen Danny Murphy playing up front and proving to be a constant threat; testing Carlow goalkeeper Darren McGarry with a free-kick.

Carlow eventually found their rhythm with both Bonner and Dean Broaders going close to breaking the deadlock. But Broaders was not to be denied from the penalty spot on 73 minutes after Andy Mulligan was taken down.

Carlow looked to be on their way to clinching the win until Murphy fired in a free-kick to the far post in the closing minutes and centre-back Mady Noah Cisse directed the ball in.

Extra-time proved to be a fiercely contested period until three minutes from time when Bonner linked up with Ryan Delaney to convert the winning goal.