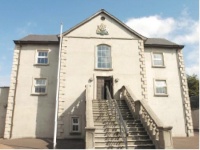 The North's Justice Minister David Ford has said he intends closing the courthouse in Strabane.

Mr Ford made the announcement in the Assembly yesterday.

West Tyrone MLA Daniel McCrossan challenged the minister on the decision, saying his dogged determination to close Strabane Courthouse flies in the face of the needs of local people and the local legal profession.

Mr Mc Crossan says this will disenfranchise people in Strabane, while creating an additional burden for the courthouse in Omagh.