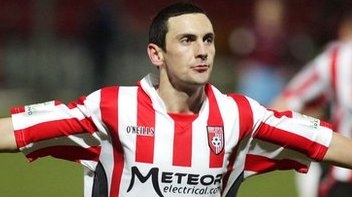 THE Football Association of Ireland today expressed its sympathies to the family and friends of former Derry City footballer Mark Farren who sadly passed away last night.

Farren, 33, will forever be remembered as one of the best strikers seen in the League of Ireland and his passing after a battle with illness is a terrible loss to the game.

The Greencastle, Co Donegal, native had spells in the UK with Tranmere Rovers and Huddersfield as a teenager before making his mark with Derry City after stints with Finn Harps and Monaghan United. He went on to become the Candystripes’ record goal-scorer in an illustrious career.

Farren was part of the Derry City side that won the FAI Cup in 2006 and 2012, he also helped the club to the First Division title in 2010 and won the League Cup five times. He was presented with an FAI Hall of Fame award in 2014 and was voted PFAI Player of the Year in 2005. His final club football was played in the Irish League with Glenavon FC.

FAI CEO John Delaney paid tribute to Mark and passed on his condolences to the Farren family. He said: “Mark’s sad passing is a devastating blow to everybody in Irish football. He was not only a tremendous talent, but a real gentleman, who was widely respected in the League and very popular with his team-mates throughout his years in the game. I would like to pass on my deepest condolences to Mark’s family."

SSE Airtricity League Director Fran Gavin said: “We were all deeply saddened to hear of Mark’s passing. We were all aware of his battle in recent years. I met Mark and his wife Terri-Louise at the play-off in November which was the last time I saw him. It’s just so sad that somebody so young and gifted taken so young. We’ll all remember him for the brilliant football and his great goals.”

Eamon Naughton, chairman of the SSE Airtricity League committee, added: “Mark will be very sadly missed as a person as well as being remembered as a great player. We are all thinking of his family and friends at this terribly sad time.”