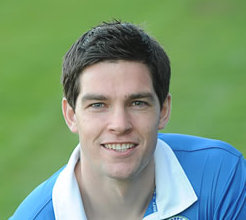 With Finn Harps pre-season training starting tonight, Manager Ollie Horgan has been boosted by another of last seasons heroes re-signing for the Premier Division season.

Hot on the heels of Keith Cowan staying at Finn Park, Packie Mailey has given his commitment for another year with the Ballybofey side.

In two spells with the club the big defender has played 127 times since making his debut in 2009.

Speaking to finnharps.com Packie is looking forward to the Premier Division campaign which begins in March. “I’m delighted to have signed back with Finn Harps, last season was unbelievable gaining promotion not just as a player but as a fan of the club as the club is back in the Premier where it should be. I’m looking forward to getting a good pre-season under my belt after missing a large chunk of last season through injury so the hard work starts now which is an exciting time to be involved with Finn Harps,” he said.

Harps boss Ollie Horgan said: “We are pleased to get Packie back on board for the forthcoming season. Hopefully he can have a bit more luck with injuries and like the rest of the squad we know he will be very determined to prove he can compete at Premier level. We are looking forward to getting back into training tonight and getting rid of any cobwebs before we start getting down to the serious fitness work.”