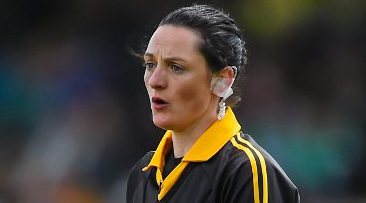 In a historic game that saw Maggie Farrelly from Cavan become the first female referee to take charge of a senior inter-county match, Fermanagh edged out St Mary’s by 1-13 to 0-14 in a tight contest at Garvaghey last night in the Dr. Kenna Cup.

The sides were deadlocked at the halfway stage on 0-6 apiece, with Fermanagh’s Tomas Corrigan drilling over four points for the Erne men, one of them from a free.

Ryan Johnston and Neil McNicholl were on target for the students in difficult conditions, with incessant rain making life tricky for both sides.

Kevin McKernan drilled over a point to give the students the lead, but Barry Mulrone responded with a wonderful score, and Sean Quigley also hit the target.

Patrick McBride responded with a point for the students, but Eoghan O’Flaherty fired home a late goal to win it for the Erne men.

Up until last night Maggie Farrelly's cv included quarter and semi finals in the Cavan Senior Club Championship while she was also the first female to take charge of an inter county game when she overseen the Fermanagh Antrim Ulster Minor Championship tie.

Maggie is no stranger either to Donegal, She studied in Letterkenny and also won a club championship playing for Glenfin ladies.

Meanwhile, Antrim defeated Queen’s University by 3-11 5o 1-11 at the Dub, where the competition saw the first home game hosted by a college side.

A tight contest was finally decided by a lobbed goal by Brian ‘Bam’ Neeson, who has returned to the county colours after a year away.

Marty Clarke edged the students ahead early on from a free, his potential return to Down colours remaining a mystery after two games in the McKenna Cup

Queen’s led by 0-8 to 0-5 at the interval, but a Ryan Murray goal gave the Saffrons a timely lift shortly after the resumption.

Tomas McCann fired home a brilliant second goal for Antrim, but Gerard McGovern also hit he net for QUB as they continued to test their opponents.