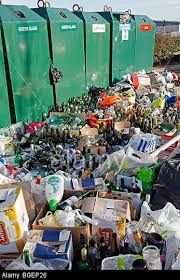 Donegal County Council says an extra lorry is being deployed this year to ensure that recycling banks are emptied over the Christmas period.

It's in response to Cllr Michael Cholm Mac Giolla Easbuig, who says in previous years, bottle banks were not emptied over Christmas, leaving many areas very unsightly.

He says while it's regrettable that the Christmas service is being provided by a private contractor, it's welcome news that it will be provided..............