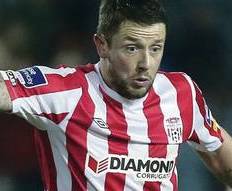 Derry City have announced the return of Rory Patterson to the Brandywell.

The Strabane man left the club in 2014 and had spells in Australia and with FC United in England.

Patterson has agreed a one year deal and is the second striker signed in the last week by manager Kenny Shiels, following the arrival of Jordan Allan from Scotland.

During his previous 93 Derry appearances, the 31 year old scored 61 goals.