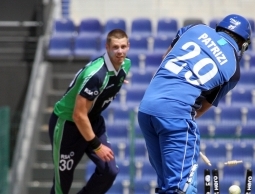 Boyd Rankin is returning to International Cricket with Ireland.

The Bready man will be on the Ireland team to play in the Intercontinental Cup in Australia and the World Twenty20 in India in March.

Rankin played for England up until January of last year and made the last of his 82 appearance for Ireland during the 2012 ICC World Twenty20 in Sri Lanka.

“I’m delighted to be returning to Irish cricket, where I was born and learned the game,” said the County Tyrone man.

“I’ll always be grateful to England for the chance to play Test cricket, but with little opportunities in the last two years, I felt it was time to move on at this stage of my career.

“There’s a real opportunity for Ireland to get Test status now, and that prospect was a real lure for me - I’d love to be part of history. Before that of course there’s a T20 World Cup in India - I’ve played in three before with Ireland and it’d be great to make it four.

Ireland play Papua New Guinea in Townsville, Australia in the 3rd round of the InterContinental Cup from January 31-February 3. They are currently top of the table with a maximum 40 points from their wins against the UAE and Namibia.

They have been drawn in Group A along with The Netherlands, Oman and Bangladesh in round one of the ICC World Twenty20 which gets under way in India in March. If they win the group they will proceed to the Super Ten phase where they will play India, Pakistan, New Zealand and Australia.