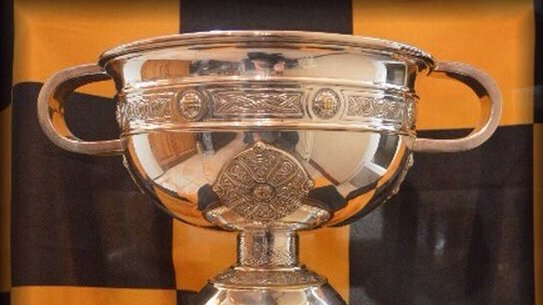 Tyrone won the O Fiaich Cup with a runaway win over Louth at Crossmaglen today (Sun).

Tiernan McCann and Connor McAliskey scored the goals that saw the Red Hands romp to a 13 points success with a dominant second half display.

Louth took the lead briefly through Gerard McSorley, but Tyrone struck a volley of scores through Lee Brennan, Ronan O’Neill and Conal McCann late in the first half to take control.

And in first half stoppage time, Tyrone scrambled a goal, Tiernan McCann finishing the ball over the line after it had run loose as McGeary attempted to release Brennan.

The Red Hands led by 1-7 to 0-3 at the interval, nad dominated the second half while playing into the wind.

Jim McEneaney and McSorley were the only Louth front men to trouble the Tyrone defence, while the Ulster side scored at will, with Brennan, Niall Sludden, Richie Donnelly and Connor McAliskey on target.

McAliskey rifled home a 58th minute goal, and there was no way back for the Wee County.