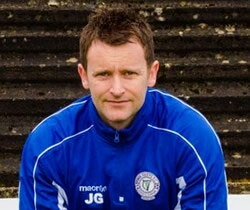 James Gallagher has stepped down as Finn Harps Assistant Manager.

James has informed manager Ollie Horgan & Club Officers that due to personal reasons he cannot offer the position the commitment required for 2016 premier season.

The Harps board acknowledged the huge contribution James has made to the clubs on-field progression & promotion success since his appointment two years ago.

The club has begun discussions with first team manager Ollie Horgan regarding appointing a successor to James and will announce developments in the near future.

Harps Chairman Sean Quinn says “Naturally we are disappointed to be losing James as he played a key role in our recent success, but we have to respect his decision and understand the huge commitment and sacrifices that are required at this level.

James has giving huge service to Finn Harps both a player and in management positions, and we greatly appreciate all he has done for us. We wish James the very best in his future endeavours.”