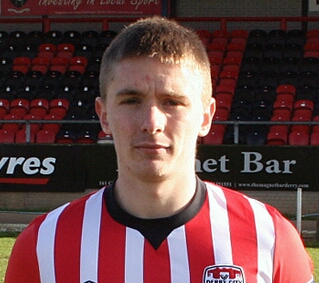 Finn Harps have announced the signing of Ryan Curran from Derry City.

The 22 year old striker scored 7 goals in 24 appearances for the Candystrips in the Premier Division.

Ryan told finnharps.com "As soon as Ollie contacted me I felt this was a opportunity for me to take the next step in my career.”

“I am delighted that Ollie and Finn Harps have put their faith in me and I feel this move will give me the chance to really make my mark in the League of Ireland”.

He is Ollie Horgan’s 10th signing in recent weeks as Harps continue to build their squad ahead of their upcoming return to the Premier Division.

“We are pleased that Ryan has decided to come to the club. Everyone knows Ryan is a player who has a lot of potential and if he works hard then there is no reason why can’t achieve very positive things at Finn Park” the Harps boss said after securing Curran’s signature.