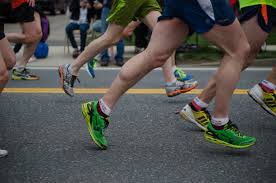 The Winter Woolie Warmer fun charity event which took place at the later than normal time of 9.30pm,

Once again, it proved a tremendous success with a big crowd of runners and walkers taking part.

The race was won by Ciaran Doherty of Letterkenny AC in a time of 15.20

His clubmate, Pauric Breslin was second with James Clarke of Clones AC third.

Teresa Doherty of Finn Valley AC was fourth overall in a time of 16.49.