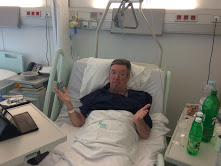 Comedian Conal Gallen has spent the past two weeks in traction in hospital after a golf buggy flipped over in a freak accident while on a break in Portugal.

Conal was on his first day of a short break in the Algarve when the dramatic incident happened. The funny man was thrown from a moving golf buggy and crashed to the ground sustaining a broken pelvis. “It all happened so quickly. One second I was in the cart, next I’m on the ground in agony”

Conal was rushed to hospital and a flurry of scans and x-rays revealed he had sustained serious injury. Doctors immediately placed him in traction to help his pelvis heal. Thankfully the swift action of the medical team had him on the road to recovery within hours of the accident. “Slowly but surely I’m coming around, the staff here are all great but it’s been a long few weeks not being able to move” explains Conal.

This is an extremely busy time for Conal with his one man stand up tour in full swing and unfortunately he has had to postpone all of his shows in the run up to Christmas while he recovers. “Once the doctors told me I would be in traction I knew there was no way I would be able to get home for the shows.” Explains Conal “I hate letting people down and having to get my staff to make the calls to all the theatres and hotels around to country was the last thing I wanted to do but I knew there was no alternative.”

“Theatre and hotel staff have been fantastic helping to reschedule the shows. All the messages of support and well wishes I have received from fans and fellow entertainers has really kept my spirits up”

Doctors today delivered Conal the news he had been hoping for over a fortnight, he will be fit to fly back home next week. “I’m over the moon!” beams Conal.

Doctors have explained Conal will have to use crutches and a wheelchair until his pelvis is fully mended but Conal is going to take it all in his stride. “I refuse to let anybody else down. I’m back doing all my shows from 27th December, the first few might be slightly different than usual but I promise they will be equally, if not more entertaining!” jokes Conal. " I think I might be the worlds first sit down comedian"!!!