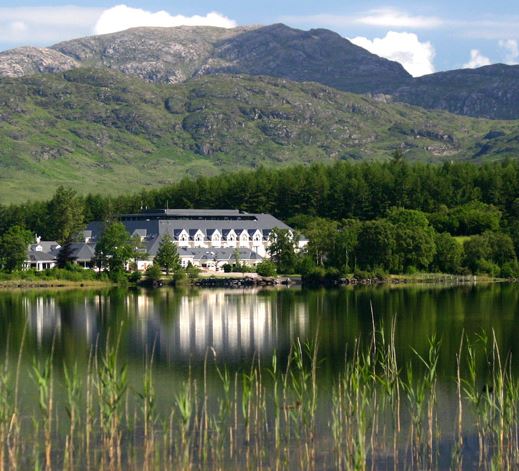 Harvey's Point Hotel at Lough Eske became the site of one of Ireland's first same sex marriages, when Wayne Gough and DJ O’Hanlon married at 9.30 this morning.

The couple, who live in the village of Lordship, near Carlingford in County Louth, had a simple wedding before registrar Siobhan Duffy-Browne.The couple were married at the Lakeside Pier where they got engaged a year ago.
By the time the same-sex marriage referendum was passed they had already arranged for a civil partnership in Harvey’s Point on September 25 with 130 guests already invited so they went ahead with it.

Today was the first day for same-sex marriage after couples were able to register their intention to wed from yesterday. Last night, Wayne and DJ dissolved their civil partnership on Monday evening in Ms Duffy-Browne's office before they could conduct a full marriage today.

The Irish tricolour stood alongside a rainbow flag at the ceremony, because the pair wanted to represent the LGBT community and to remember all those who had never made it to a wedding.