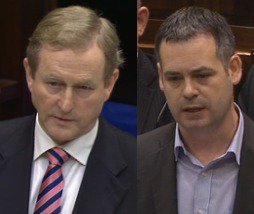 Sinn Fein's Pearse Doherty has been quizzing the Taoiseach in the Dáil over his claims he was told to be ready to deploy the army to guard banks and ATM's.

Mr Kenny claimed at a conference in Madrid last month that the Central Bank governor told him to prepare to deploy the army if the euro collapsed.

Donegal Deputy Pearse Doherty's today accused the Taoiseach of misleading the Dáil as he tried to draw a line under the controversy:

Responding, An Taoiseach said he made no apologies for overseeing contingency plans to deal with a sudden change of currency.