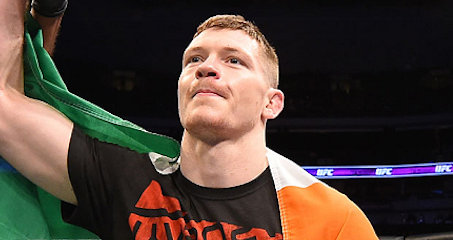 The Donegal man suffered a mild concussion during training this week and cannot take part in the headline fight at the 3 Arena.

He was due to fight AmericanDustin Diamond Poirier in the lightweight contest.

"So sad to announce that I won’t be fighting on Saturday" said Duffy.

"After a strike to the head in training I had precautionary medical tests which resulted in me being deemed not fit to fight. Obviously I’m absolutely gutted, I really wanted that fight and felt sharp in training".

"Firstly, a huge apology to Dustin. We have both put in an incredible amount of work to get ready for the fight , he’s a great fighter and I hope I get another chance to face him".

"Sorry to all my fans, friends and family who were planning to come and see me fight and who have supported me all the way".

"Although it’s hard to think about anything other than the disappointment right now, I can’t wait to get another fight booked in and hope to be in the octagon as soon as possible".