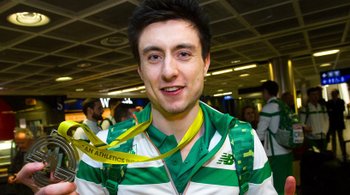 Thomas Barr, Mark English and Robert Heffernan are set to contest the National Athlete of the Year at the GloHealth National Athletics Awards on Wednesday 25th of November from 12.00-3.30pm in the Crowne Plaza Hotel, Northwood.

The nominations have been announced for the awards ceremony which is a celebration of the many successes of Irish athletes during 2015 and also commemorates the exceptional volunteer base who are the bedrock of the sport.

Thomas Barr (Ferrybank), Mark English (UCD) and Robert Heffernan (Togher) are in contention for the top gong following their top class performances this season. Barr set a national 400m Hurdles record of 48.65 seconds at the Rome Diamond League and went on to win the World Universities title in Gwangju, South Korea.

English has continued his rise into world class territory and impressed again last summer making the semi-finals of the World Athletics Championships in Beijing with a top ten finish overall.

Heffernan put in a gallant display in Beijing for the defence of his World 50km Race Walk title - the Corkman finished a fighting fifth proving that he will be a medal contender come the Olympics in Rio.