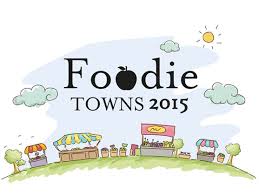 Derry has been named as the runner-up in the Irish Foodie Towns, narrowly losing out to The Burren in County Clare.

The Restaurant Association of Ireland has confirmed that Derry secured the highest number of online public votes, and is certainly a big contender for next year’s competition.

The Restaurants Association of Ireland are delighted to announce that the winner of Foodie Towns 2015 is The Burren. After a rigorous few weeks of applications, town visits and near to 9,000 online votes, The Burren have beaten the competition and proved themselves to be an excellent leader as a foodie destination. From bustling farmers markets to innovative strategies for growth and development, they set the benchmark for food tourism in Ireland.

"It was so encouraging to see the high standard of applications for this year's Foodie Towns competition – to reach the Top 10 alone was a real achievement for each of these destinations, given the competitive calibre. But what made The Burren stand out as exemplary was the comprehensiveness of their food offering from field – or in their case, fertile rock – through to fork. Food-loving tourists to The Burren are in for an intriguing treat." – Aoife Carrigy, Chairperson, IFWG

The winner was announced at a private event in Fallon & Byrne, Dublin, where representatives from each final destination attended to hear the result. President of the RAI Anthony Gray presented the award to an elated bunch of Burren representatives. The winners were presented with a Newbridge Silver framed platter and had this to say:

“We’re not normally stuck for words. Thank you very much to the Restaurants Association for this wonderful competition which makes us tell our food story. Thank you to the judges, Dee and Aoife, and to all involved. We have five of us here today but we represent a huge bunch of us in The Burren. The Burren in its entirety has never told its food story, but that has really come to fruition this year. A big thank you from all of us” – Tina O’Dwyer, Burren Food Trail

The runner up announced was Derry, who also performed very well in the competition and have proved themselves to be one of the top foodie destinations in Ireland. They were very narrowly beaten and gained the biggest amount of public votes. Derry is certainly a big contender for next year’s competition – ones to watch for sure.

'As someone who spends a lot of time travelling in Ireland, I've been thrilled to witness the growth and development of the country's food scene. There is real momentum now, and judging the Top 10 has made me want to re-visit these destinations ASAP! The Burren has done something that, 10 years ago, few would have thought possible. It has turned what was once thought of as a desolate National Park into a thriving foodie destination. Any town, community or region interested in developing their food product should take a field trip as soon as they can. The Burren really is now best practice.' – Pól Ó Conghaile, Travel Editor of The Independent and independent.ie

“It was incredible to see the high calibre of applications for this year’s Foodie Towns. As food tourism grows in popularity - it is great to see so many places putting local food at the forefront of the visitor experience. The Burren’s strong collaborative food network and ethos of joined up thinking ensures that its unique food story is delivered to every visitor on the ground. I would like to congratulate The Burren as winners of this year’s Foodie Town award which is sure to further boost their profile as an outstanding food destination”   -  Sinead Hennessy, Food Tourism, Fáilte Ireland

Along with the winner The Burren and the Runner Up Derry, the remaining eight finalists, who also deserve to be commended for reaching the top 10 include: