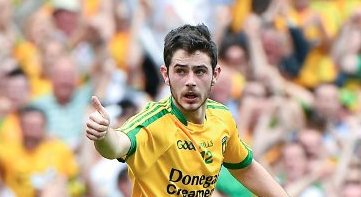 Donegal's Ryan McHugh has been named as one of the three nominations for the GAA/GPA Young Player of the Year award,

The Kilcar man is joined in the category by Mayo's Diarmuid O'Connor and Monaghan's Ryan Wylie.

Three Dublin players have been nominated for the Player of the Year prize - Bernard Brogan , Jack McCaffrey and Phily McMahon all make the list.

The All-Ireland champions Dublin, who completed a clean sweep of honours in 2015, lead the way with 11 nominations and they are followed by defeated All-Ireland finalists Kerry, who collect eight.

The two beaten All-Ireland semi-finalists, Tyrone and Mayo, come next in the pecking order with seven apiece.

The remaining nominations go to Fermanagh, Westmeath and Laois, who receive one each bringing to nine the total number of counties who are represented on the 2015 shortlist.

The awards will be presented at the Convention Centre in Dublin on Friday November 6.