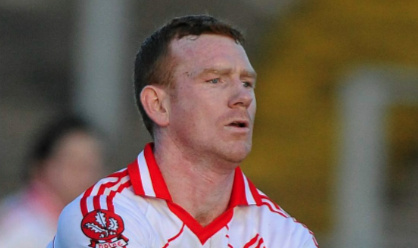 In a statement released through the county’s PRO, The Bellagh man said he made the decision to call time on his inter county career due to work commitments and recurring injuries.

Doherty said, “It has been a privilege and an honour to wear the red and white jersey representing our county. I have enjoyed my time playing inter-county football and it’s something that I will miss. However, I feel the time is now right to make this call.”

“I want to wish Damian Barton and all the lads the very best of luck for the season ahead.”

Derry senior football manager, Damian Barton commented:
“Fergal was a player with great presence and great temperament. He was a leader who commanded respect. Fergal was one of the few players who could catch the ball at a great height and then hit the ground running. His immense presence will be missed. However, it is now up to the new generation of Derry footballer to replicate the same qualities which Fergal Doherty demonstrated.”

Former Derry senior football manager, Brian McIver commented:
“I want to wish Fergal well in his retirement from inter-county football. He was a pleasure to work with at all times and is, in my opinion, one of the greatest midfielders to have played the game.”