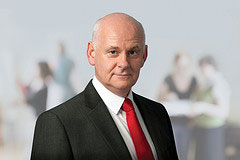 The Labour Senator Jimmy Harte has resigned from the Seanad.

Mr Harte was seriously injured in a fall at the end of 2013.

On November 16th 2013, Senator Harte was found unconscious close to his Dublin apartment in the Newmarket Square area of Dublin 8 with life-threatening head injuries caused by a “tragic fall.”

Jimmy Harte is the son of former Fine Gael TD Paddy Harte and left the party and was an Independent before joining Labour.