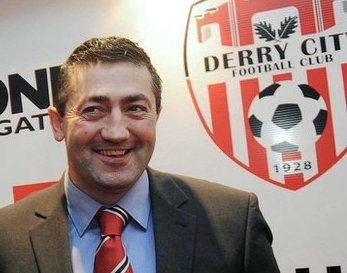 The decision was made in the wake of Monday nights cup defeat to Cork City at Turners Cross.

Hutton's assitant Paul Hegarty will take charge as caretaker manager for the final six league games of the season.

In the Premier Division, the Candystrips  have struggled in the bottom half of the table, losing 14 of their 27 games, winning 6.

Derry are in the thick of a relegation battle with six teams separated  by just six points.

"The Derry City FC Board Of Directors would like to announce that Peter Hutton has left the club by mutual consent.

Derry City FC would like to thank Peter for his service, and we wish him well for the future.

Paul Hegarty will take over as caretaker manager until the end of the season."