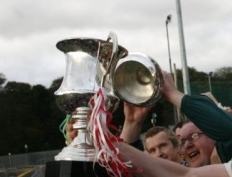 St. Michael’s 3-15 V 1-05 Malin
St.Michael's cruised into the semi-finals of the Donegal Senior Football Championship on Sunday afternoon beating Malin 3-15 to 1-5 at the O'Donnell Park in Letterkenny.

When the second goal by St. Michael's Ciaran Gallagher hit the back of the net fourteen minutes into the first half, the writing was very much on the wall for the Inishowen club.

Andrew Kelly was man of the match with a 2-3 total, while Peter Witherow, Michael Canning, Daniel Mc Laughlin, Michael Langan and county men Christy Toye and Colm McFadden were all prominent contributors.

They join Kilcar and Naomh Conaill in the hat for the semi-final draw which will be made after this evenings quarter final between Glenswilly and St. Eunans