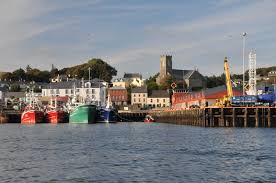 A second fisherman has died after being overcome by fumes while working on a trawler in Killybegs on Monday.

A 27-year-old man from Co Galway was pronounced dead shortly after the incident.

A second fisherman, who was in his 40s and from the Philippines, was also overcome by fumes when he tried to help his colleague.

He has died at Letterkenny General Hospital.

Separate investigations are underway by Gardai and the Health and Safety Authority.