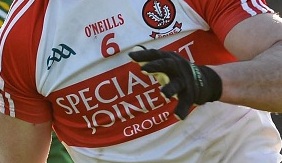 Derry's hopes of making the All Ireland Minor Final came to an end at the hands of Kerry losing 1-11 to 1-6 at Croke Park.

Derry's goal came three minutes into the second half as a high ball from Conor Maunsell sailed straight into the net to level the tie.

Kerry's goal was scored five minutes later to put the Kingdom four points up and they never surrender that advantage for the rest of the game.