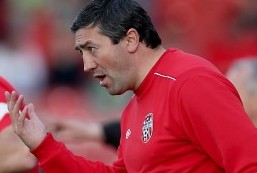 Derry City are through to the last eight of the Irish Daily Mail FAI Cup after an impressive 3-0 defeat of Drogheda United at the Brandywell.

Goals from Patrick McEleney, Cillian Morrison and BarryMcNamee paved the way for victory.

Manager Peter Hutton with very pleased with his side's performance and says that the result lifted the players and the fans.

He spoke with Martin Holmes following the game....