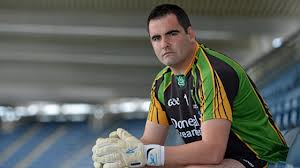 Donegal goalkeeper Paul Durcan says he may not be done with the county yet.

The All Star keeper is moving to Qatar with his wife who is taking on a teaching job but the player himself admits he doesn't know when.

Durcan responded with "no it wont' when asked if it meant the end of his Donegal career.

Meanwhile Frank Mc Glynn has said this week he will be back with the county next year.

The Glenfin man said we’re going into the club championship now over the next few weeks and then we’ll sit down together in October/November.