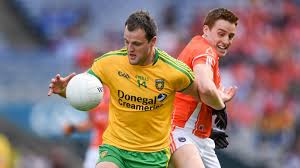 Later today Donegal play Galway in the All Ireland Qualifier at Croke Park.

Speculation has been rife over the passed two weeks that captain Michael Murphy has been carrying a knee injury.

On UTV Ireland's Friday Night Sport programme, former Donegal star forward Brendan Devenney said Murphy will not play on Saturday against Galway and the management were holding him back for a possible quarter final with Mayo next weekend.

In his pre match interview on Highland earlier this week Donegal Manager Rory Gallagher said Michael was fine and going well in training.

The county are already at a loss with Karl Lacey out due to medial ligament damage. His place at centre half back will be taken by Anthony Thompson for today's game.

If Michael Murphy doesn't start, it will be first time Donegal have fielded without him and Karl Lacey since 2004 Ulster final.

Oisin Kelly and Declan Bonner will have LIVE commentary from Croke Park this evening on Highland. Throw In is 6pm.