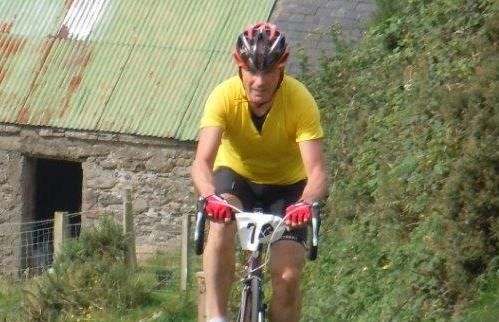 Hughie Gallagher from Gweedore is undertaking a mammoth task on Saturday 1st August 2015, starting at 12 noon when he cycles 420 miles non-stop around the perimeter of our beautiful County Donegal, taking in the Wild Atlantic Way, Glengesh and Mamore Gap.

Hughie has previously undertaken numerous challenges, including cycling non-stop from Mizen Head to Malin Head (360 miles) in 2009; cycling from Gweedore to Dublin and back to Gweedore (360 miles) non-stop in 2011.

His latest challenge was when he took part in Relay for Life in June 2014 when he cycled non-stop for 24 hours on a training bike during the fundraiser.

Any funds raised from sponsorship of this cycle will go towards purchasing uniforms and instruments for Dore Marching Band in advance of their trip to New York to take part in the St. Patrick's Day Parade in 2016.

The route for the cycle is as follows:-