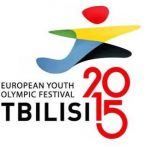 The European Youth Olympics continues today for Finn Valley's Sommer Lecky and Arelene Crossan who are in finals action.

Lecky will tackle the last round of the High Jump later in the afternoon in Tbilisi, Georgia after the he 15 year old progressed to the final with a season's best leap of 1.72m. on Tuesday.

Arlene will also contest the Girls Long Jump Final thanks to a best jump of 5.73m in the qualifiers.

Finn Valley team mate Aaron Mc Glynn will be in the 800m final on Friday.

Elsewhere, Valley's  James Kelly and Janine Boyle have been named on the Ireland team to compete at this weekend's Celtic Games in Glasgow.

Kelly will throw in the u16 shot and Boyle will run the u18 sprint.