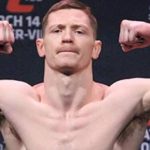 Joseph Duffy's journey through the UFC lightweight division will continue in Dublin as a headline fight.

In his third UFC contest, The Donegal man will take on American Dustin 'Diamond' Poirier in the 3 Arena on Saturday the 24th October.

Poirier is a big name in the UFC and is a good opponent for Duffy who won his first two fights in the first round.

Both have history with Conor Mc Gregor, Duffy was the last man to beat the interim featherweight champion during his time in Cage Warriors while Poirier lost to him last September and has since moved up to lightweight.