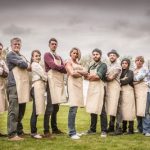 A former member of Buckingham Palace’s Coldstream Guards is among the contestants for this year’s The Great British Bake Off.

Forty-nine-year-old Paul, from Wales, has been a prison governor for eight years but previously performed ceremonial duties at the Palace.

He said the show is “an opportunity to show that men like me, stereotyped by our jobs, do and can love baking and that it is a skill and talent to be proud of”.

The hit culinary show returns to BBC One on August 5 for a sixth series.

Last year’s winner, Nancy Birtwhistle, had an impressive 13.5 million viewers tune in to see her take the crown.

Returning to the show are judges Paul Hollywood and Mary Berry, and presenting duo Mel Giedroyc and Sue Perkins.

Welsh hopeful Paul is not the only one hoping his baking skills rise to the challenge and impress the judges though.