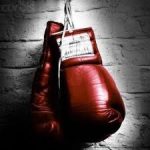 Tyrone Mc Cullagh had a winning start to his professional career at the weekend in Cheshire England.

Tyrone was dominant from the start catching Laska with a succession of good left hands and a couple of good body shots in the openind round.

The second continued like the first although the rate of body shots greatly increased, so much so that Laska was put down and could not continue to fight.

Tyrone has to assess where he is now and where he is going to go from here regarding his 2nd professional fight.

Meanwhile he continues to train with Gerry Storey in the Holy Family Club and with Clive Whitbread at the Inishowen Club, Buncrana