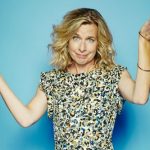 Katie Hopkins has admitted she regrets some of the extreme language she used against migrants.

The media personality – who is to launch her own panel show If Katie Hopkins Ruled The World next month – sparked outrage in April when she wrote a column in The Sun entitled “Rescue boats? I’d use gunships to stop migrants”.

She wrote: “Show me pictures of coffins, show me bodies floating in water, play violins and show me skinny people looking sad. I still don’t care.”

Katie went on to describe the migrants as “cockroaches” and “feral humans”, prompting the UN high commissioner for human rights, Zeid Ra’ad Al Hussein, to denounce her for using racist language and comparing her comments to pro-genocide propaganda.

Katie prides herself on never having apologised for anything she’s said, but in a new interview with the Press Association she admitted: “There’s some things about that column, there are some words which in hindsight you’d probably look to pull out of there.

“But I think overall my message isn’t about the idea that we want to see migrants and people suffering, it’s an idea that we need to find solutions to problems.”

The 40-year-old mother-of-three defended making a living from expressing extreme points of view in public.

Katie said: “I think it’s really easy to dismiss me as a controversialist or somebody that just says some stuff just for a reaction. But I think if those things were true, and I understand why people say them, but then you wouldn’t be able to defend yourself, or you wouldn’t want to take the barrage of abuse that comes your way as a result of some of them.

“But I’ve never apologised for anything I’ve said, I’ve stood by everything I’ve said. I’m not interested in the celebrity idea of people that want to be saccharine sweet or keen to be loved or are manufactured by a PR company to be a certain thing.”

She added: “I’m giving a voice to a whole bunch of people who are frustrated by this continuing war that makes us super PC, the demands we be multicultural at all times, in all aspects of our life. I think I give a voice to a whole swathe of grafters, workers, the regular, good, everyday, British citizen that’s trying their best to do the right thing for their family, for me that’s who I represent, that’s who I’m really keen to stand up for. And that’s the Katie Hopkins I want to be.
“I appreciate there may be a cynical view of that and other people saying, ‘I wish I could gob off for a living’, but it turns out I just do it rather well, and I think I’m reimbursed accordingly.”

The former Celebrity Big Brother contestant is set to host her new show on TLC and insisted she welcomed panellists and audience members who will disagree with her.

“If you have the opposite view of me, that’s a perfect thing,” she said. “I would champion you to be the opposite of me. I think there’s an idea I want to convince everyone to have ‘my world order’ like some kind of North Korean Kim Jong Un. That’s not who I am. I really celebrate the fact we have different opinions and I really encourage people to stand by those in a firm way.”

She said: “People imagine that to be true, I think many people want that to be true as well. People want me to be pelted with eggs and imagine that to be a reality. Whereas, I get public transport, I take the bus, I take the underground, I take the train. My world is very different, perhaps, to how people imagine it to be, There’s a lot of support out there for somebody who is prepared to push back against the walls of political correctness that seem to be closing in on us.”

But she admitted: “I have to be quite fearless to handle the level of ‘feedback’ I get. Whether that’s people on Twitter which are ultimately very fierce, whether that’s a hacker taking down my account, whether that’s someone reporting me to social services for the welfare of my children, whether that’s the head of the UN complaining about something I’ve written. I’m surrounded by attacks all the time and I recognise I’ve brought those on myself, but I need to be fearless in my defence of my opinion.”

If Katie Hopkins Ruled The World airs on Thursdays at 10pm on TLC from August 6.