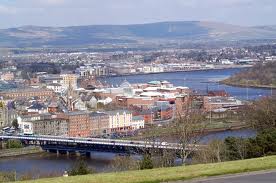 A proposal by Sinn Féin to change the official name of Londonderry to Derry has been described as "sectarian" by unionists.

A motion supporting the name change was passed at a meeting of Derry City and Strabane District Council yesterday.

Council will now write to the Environment Minister to seek clarification on how to go about the change.

Sinn Fein Cllr Eric McGinley has claimed that the majority would much prefer the city being named Derry: