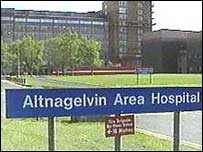 A man who was 'aggressive and violent' in Derry's Altnagelvin Hospital has been jailed at the local Magistrate's Court.

52 year old Jospeh Harkin of 41, Altcar park in Derry admitted being disorderly in the hospital, assaulting police, resisting police and criminal damage that occurred on May 30 this year.

The court was told that Harkin was in the A&E department of the hospital, and refused to let staff assess him. He then became 'violent and aggressive' and was kicking doors.

Staff at the hospital then refused to treat him until he had sobered up. Police tried to reason with Harkin but he tried to head butt an officer.

When he was arrested he spat in the rear of a police vehicle requiring it to be cleaned.

He said he had been abusing his body for the last 30 years.
Harkin was jailed for 4 months.