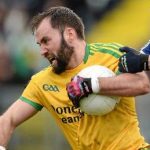 Karl Lacey has emerged as a serious doubt for Donegal's Round 4B Qualifier with Galway on Saturday 1st August.

The 2012 player of the year picked up a knock to the knee in Sunday's Ulster Final defeat to Monaghan in Clones.

Karl was due to have a scan on the injury on Wednesday.

Donegal Manager Rory Gallagher told the Donegal Democrat" the injury is not a serious as first thought but it will be touch and go if he's fit for the Galway game".