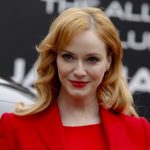 Hollywood’s leading ladies are often cast in roles that are well beyond their years, but Christina Hendricks was shocked to be asked to play the part of Charlize Theron’s mother – despite being just three months older than her.

The 40-year-old actress was asked to play the role of Patty Day, mother to 39-year old Charlize’s character Libby Day in the film adaptation of Gillian Flynn’s novel Dark Places.

But thankfully, Christina had little reason to be insulted: Libby’s murdered mother only appears as her younger self in flashback scenes.

Christina was originally slated to play stripper Krissi Cates in the film, but was upgraded to the role of Patti after a drop-out from Samantha Morton.