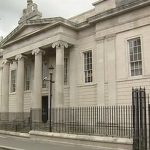 A Derry man has been returned for trial to the local Crown Court charged with two counts of rape that were said to have occurred in 1988.

He was charged with the rape of a woman on two dates between January 1 and December 31 1988.

One of the rapes was said to have occurred in Derry and the other in the court division of Craigavon.

It was accepted there was a case to answer and Simpson said he did not wish to call any witnesses or make any statement at this stage.

He was released on his own bail of £500, and returned for trial to appear at Derry Crown Court on August 28th.