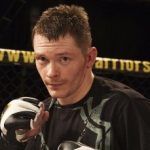 The Donegal fighter forced a submission on opponent Ivan Jorge in a stunning opening round performance.

A triangle choke three minutes into the fight was the moved which gave Duffy victory in front of a huge Irish and Donegal crowd in the SSE Hydro Arena.

The 27-year-old out of Tristar gym has extended his MMA record to14 wins with 9 of those via submission.