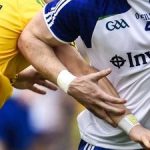 The Monaghan team to play Donegal in Sunday's Ulster Final has been named.

Owen Duffy and Stephen Gollogly, who were introduced off the bench against Fermangh keep their places in the half-forward line ahead of Kieran Duffy and Owen Lennon.

Drew Wylie, Paul Finlay and Dick Clerkin are named among the subs.