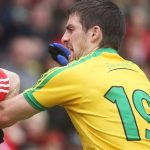 It could be Friday evening before the lines ups of Donegal and Monaghan will be revealed ahead of Sunday's Ulster Final.

The teams have to be with the Ulster Council today but the starting sides will not be released to the public until tomorrow.

Donegal have a fully fit squad that includes Patrick Mc Brearty who is expected to be in the forward line from the start.

After picking up a knee injury in the semi final win over Derry, there were fears that the Kilcar man's participation would be hampered.

Bar Drew Wylie, Monaghan will also be at full strength.

The Monaghan County Board have confirmed it will be after 6pm on Friday before they release their team for the decider.

Ardara's Paddy Mc Grath says it's fantastic to be in another provincial showpiece but being there is not good enough...

Ballybay's Christopher Mc Guinness is hoping to be part of the Monaghan match day squad after picking up an ankle injury.

The Farney goalscorer in last years final says Monaghan will prep for the game as they do for every other...