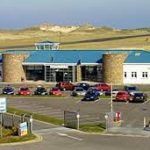 The Donegal Airport to Dublin route saw passenger numbers grow year on year by 11.3% in June, which itself was the fifth consecutive month of growth on the route

Nationally, the service which is operated by Stobart Air, recorded a four percentage point growth in passenger load factor, compared to the same period last year.