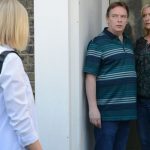 EastEnders’ Ian and Jane Beale get a nasty shock tonight when they find out a new witness has come forward in the investigation into Lucy Beale’s murder.

The couple have been covering up for their son Bobby, who was just 11 when he killed his older sister accidentally in a fit of rage.

Ian (Adam Woodyatt) is furious when journalist Beth Kennedy, played by Jordan Baker, turns up on their front doorstep. She had previously criticised Lucy during his emotional appeal and he doesn’t want to talk to her.

But when she reveals the police have a new witness in Lucy’s murder case, anger turns to worry as Ian and Jane (Laurie Brett) fear Bobby’s guilt will be exposed.