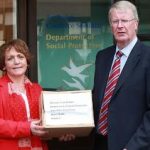 Postmasters across the country have returned thousands of new Social Protection forms to Minister Joan Burton’s Department in protest against their usage.

In a coordinated move by the Irish Postmasters Union, the forms were posted back to the Department of Social Protection. Members of the Union’s Executive, including Donegal representative Breid Gallagher, returned their forms to the Department in person.

There was anger last month when Minister Burton’s Department issued new Social Protection forms which recommended that people receive their payments by direct debit to a bank account, instead of using the Post Office.

Under the terms of their contracts, the postmasters have kept a number of forms for clients who need them.

Breid Gallagher says the sending back of the forms was a way of emphasising the depth of feeling among the IPU's membership...............