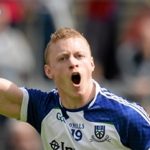 In the coming days, Donegal and Monaghan will be putting the final touches to their respective plans for Sunday's Ulster Championship Final in Clones.

Both sides head into their third provincial final meeting in a row with an almost full compliment of players.

Drew Wylie is a concern for Monaghan while Donegal have been boosted in recent weeks with Leo McLoone's return to the squad.

Monaghan's Colin Walshe returned from a cruciate injury to feature as 2nd half sub in Cavan game and start in Fermanagh game.

Speaking with Sean Caffrey of Northern Sound, The Doohamlet man is looking forward to another Ulster Final...

Donegal v Monaghan in the Ulster Senior Football Championship Final will be LIVE on Highland from 1.40pm this Sunday with Oisin Kelly and Declan Bonner in association with Brian Mc Cormick Sports & Leisure, Letterkenny